Kōhei Tanaka is the composer of the soundtracks for both Alundra and Alundra 2. 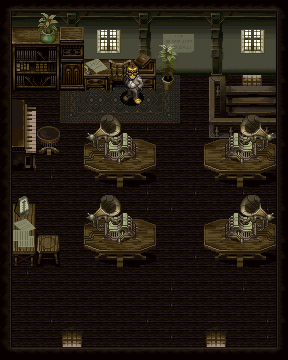 "You have the appearance of an adventurer, lad. Could you take the time to tell me tales of your travels? I'm always inspired by stories of adversity and heroism."
—Kōhei, to Alundra

Kōhei makes a cameo appearance in Alundra, residing in a house near the Coal Mine. His sprite occasionally adjusts his spectacles, and is constantly tapping his foot, presumably in time with the music in his head. As the player progresses through the game, up to four gramophones are added to the tables in the room, allowing the player to listen to the game's soundtrack.

"What did you think of it? Was it not extremely soothing? Sometimes, I think I should've added some reverb to the strings section. It would have given the piece a more spacious feel..."
—Kōhei