The teleport arches are a set of eight stone arches scattered around the Torla region, roughly in a ring around Inoa Village. After Alundra activates them, he may pass through any of the arches to connect that arch to the transport chamber, allowing him to move quickly between connected arches. 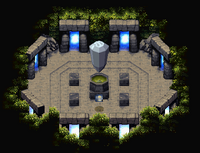 The transport chamber is a small chamber that Alundra is transported to whenever he steps through a teleport arch. The chamber consists of eight arches, each linked to the corresponding arch in the real world. The position of each of the chamber's arches corresponds approximately to the direction of its counterpart relative to Inoa Village. The chamber is bordered by a wall of strange plants. At its centre is a large floating crystal above a small pool of water. There is also a save diary in front of the crystal.

To activate the teleport arches, Alundra must first meet with Berue. This can be achieved by first obtaining the Sluice Key from the northernmost cave of the Despair Desert, and entering the chamber to the south of the waterway in the northern half of the desert. There, both switches must be thrown at once for the sluice gate to open, draining the water and allowing Alundra to enter the chamber beneath the water.

In this chamber, Berue introduces himself, and states that he has been waiting for the Releaser for millenia. He shows Alundra the signs of Harmony, Trust, Wisdom, Love and Courage, which Alundra must copy on a set of nine platforms. Doing so with, increasing speed and complexity, will satisfy Berue, and he will activate the arches.

The eight arches located around the world are as follows:

The south-eastern arch is positioned at the foot of the Cliffs of Madness south of the Despair Desert, next to Lurvy's shop.

This arch is located towards the southwest corner of the area, just north of the path to the Sanctuary area.

The southernmost arch lies north of the Dark Swamp, to the south east of Inoa Village.

The northwesternmost arch lies at the far north end of Murgg Woods. It is the last of the arches to become accessible.

The northeasternmost arch lies at the feet of Nirude, directly north of the Despair Desert.

An arch lies close to the Fairy Pond entrance.

This arch lies slightly north-west of the Fire Manor.

The northern arch lies slightly west of the entrance to Magyscar.